The reason I requested this ARC, is because of what I saw in the first line of the description: Half-huldra Retz Gallows is having an awful day. -> Wait! Did you say HALF-Huldra?!? *REQUEST!* 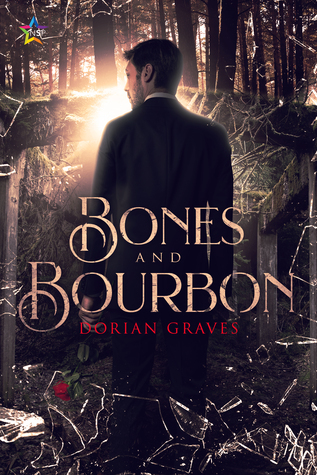 Half-huldra Retz Gallows is having an awful day. First, he wakes up in the middle of driving to who-knows-where with an angry unicorn head in his passenger seat. This is almost normal, thanks to a lifetime of sharing a body with Nalem, a bone-controlling spirit with a penchant for wicked schemes and body-stealing joyrides. It’s probably a bad idea to ask what else could go wrong.

Jarrod Gallows left home with plans to rescue his little brother from possession. Instead, he got saddled with a dead-end job as a paranormal investigator, a Faerie curse, and a daredevil boyfriend who might be from another world. At least he’s got a new job—except why is his brother Retz here and why does this sudden reunion feel more like a bane than a blessing?

This day’s going to get worse for the Gallows brothers before it gets better. To survive, they’ll have to escape the forces controlling them, as well as the wrath of carnivorous unicorns, otherworldly realms, and even their own parents. Only time will tell if they’ll make it out alive…or sober.

The book itself:  This is full on! So many fantasies and mythological creatures and elements into one book. It was fast-paced, funny, random, and really entertaining. I really enjoyed it and laugh out loud on occasion, which is a rare thing for me.

It does have all sorts of creatures and magical places into one book. It’s got huldras, furaribi,  lamia, fairies, Harvester (death), bloody Mary, bone-spirits, unicorns, a castle in the skies, princes, a red queen and a white queen, a queen of frost, fairyland, fairy curses, goblins. All of that is packed into one book. It kind of feels like the TV show “Once Upon A Time” Where all the fairytales are interlinked and grouped into one world. This has a lot of creatures in one place that normally are not found together in the same book.

The Story: In the beginning, the story feels like there are a lot of smaller subplots put together into one large story. Even the main storyline feels like it could be a subplot in a bigger book. To be honest I’m not even 100% sure which story is the main plotline…  So its a bit strange in that sense, but I’m enjoying all the subplots and the main plot, whatever it is.

In the end, the main storyline becomes clear and the unsolved storylines provide options for a second book in the series. YES!

The Characters:  Pretty much every single character in this book is morally grey, of different shades. Some didn’t even have hearts. Literally. There was no goody two shoe character, but no truly evil either. It was a mishmash of grey wonder 😁

For you how needs a list there are gay, trans, and asexual characters in here.

Retz is the main guy and the youngest brother and he’s pretty cool I think. It’s tricky to get a feel for him in the beginning as there are two characters in one here. He never really talks about himself much and is almost always living two lives, one for himself and one for Nalem. But you do really feel that he is the youngest brother. Even Nalem is constantly taking care of him and telling him what to do. An understanding of him will creep in throughout the book, both through his own actions and through his brother Jarrod’s view and thoughts.

It takes a couple of chapters before you get an understanding of who Jarred is. You get a feel for him along the way but when things become clear it all falls into place and I felt I understood the character more than Retz. I really liked Jarrod, but he’s got some serious issues. I feel more emotionally connected with Jarrod than with Retz and I think that has something to do with Retz not being himself 100% of the time. Jarrod, with all his problems, is fully himself. He does not share his body with anyone and has suffered alone for many years. Retz is never alone and always has someone there to comfort or tell him what to do. I almost prefer Jarrod of the two brothers. Almost.

Nalem is an interesting character and information about him is drip-feed into the story and his background slowly unravels. I like how he actually cares (a little bit) about Retz even though he’s supposed to be this “I have no empathy, die all!” – type character 😂 He does do some shitty stuff or gets Retz to do it for him, but in the end, I like him too.

Ferris I think is my favourite character. He is Jarrod boyfriend and sidekick. He’s funny and charming and they have a constant playful banter going. He does have a problem with his memory, which is a subplot in this book. And might evolve into something more in a later book *hopes*

I think I like all the characters in this book.

No, wait. I’m not a fan of Alexander. He is too far gone into the darkness. The rest is lovable 😊

Writing: The writing style is quick and quirky which I really liked. I can almost hear the writers personality through it. That might also be because the writing style when I read it in my head, sounds like someone I know…

The story is written from two perspectives; Retz and Jarrod’s. Both are told in the first person which makes it a lot easier to tell apart. It also helps that Retz has internal dialogues with Nalem, while Jarrod has a boyfriend he talks to and is concerned for. So telling the perspectives apart is easy.

The writing is fluid but sometimes chunky. I don’t know if that even makes sense to you, but it does to me. There are occasions when I feel a word is missing for the sentence for it to make complete sense to me, but that could be a writing style thing mixed with my level of English (second language but fluent)

Overall: I thoroughly enjoy this adventure and would definitely pick up other stuff from this author. It was funny, very entertaining and full of weird and wonderful things. But I think the main storyline and the book itself could have been stronger. There was plenty of room for more meat on this skinny thing.

Also considering the title, bourbon wasn’t even mentioned before halfway through the book… not cool. I don’t like beer.

As I said several times already I really liked this book and I hope this will become a series. The is so much potential with this world and its characters. I can’t wait to see what the author does next.

Does it sound interesting to you? Or have you read this already? What did you think?

4 thoughts on “Review time: Bones and Bourbon by Dorian Graves”