The synopsis of this arc reminded me a bit of The Mist by Stephen King, but with psychological effect instead of monsters. So I thought I would try it out. 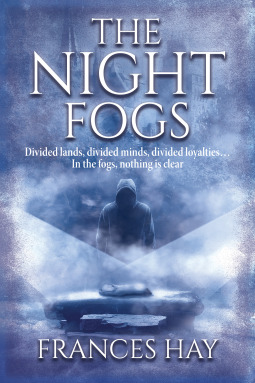 After battling with the fogs all night, the last thing El Morgan needed was to find a strange-looking baby lying like a sacrifice on the standing stones in the city park.

The capital of a newly independent Wales is a city under siege, smothered in thick fogs that sweep in at dusk and swirl around all night, disturbing people’s minds. El, a clinical psychologist, helps those worst affected by the fogs, while her sister, who’s just lost her own baby, cares for the abandoned infant. Meanwhile, Caradoc, an American neuroscientist, seeks a scientific explanation for the fogs while coping with florid hallucinations about his past life as a medieval saint. As the relentless fogs cut the city off from the rest of the world, resources become scarce, paranoia rises and the military argues for a counterattack on England.

The Night Fogs is a sharply topical, funny, satirical, and moving story that explores divisions between communities, friends, family members and even parts of ourselves.

The surprising twist at the end

I highly enjoyed this book. It’s a quick, easy, a bit shallow read centred around the newly independent Wales with a weather crisis 😂

The story follows four individuals (El, Rihannon, Cadoc and Huw Davis) trying to work through the events of the night fogs which started to roll in at New Year’s Eve. El and Cadoc work night shifts supporting the suddenly depressed members of the public in Cardiff. Riahnnon is a foster mother to a blue-skinned baby found by El on an especially foggy night, while Huw is a major in the New Welsh Army who believes the fogs are coming from across the channel and is actually a biological attack on the Welsh from the English. I liked the struggle between the two subjects of staying loyal to your country but also do the right thing in the right order.

There is a lot of potential in this book and it could have been miles longer and delved way further into the mythology and the background of St Cadoc. But it doesn’t and only gives you snips and pieces. Only the necessary information.

Minor worldbuilding is done outside the immediate world of these four people and the action that is going on. As a near-futuristic Wales, it’s based a lot on today’s Wales so not much building is needed. I would have liked more about the effects of the fog to get a deeper perspective of the effects.

I would have liked more building around the mythical stuff and St Cadoc, but you cant have everything.

There aren’t that many characters involved in this story which makes it feel smaller somehow. The narrative is mainly from the characters of El, Rihannon, Cadoc, and Major Davis.

I thought El was ok though a bit blind. I’m not sure if it was of her own choice or if she just didn’t see stuff coming. I would have liked to explore more of her opinions, feeling and overall thoughts. She is fierce and strong but still a functioning human being without many personal issues, and I liked that. We often see strong fierce women portrayed a someone who is either cold on the inside or has hated and traumatic experiences building up inside her. So reading about EL was a more realistic approach I thought. It felt more natural to me anyway that she is the way she is. I really liked that.

Riahnnon is El’s younger sister and is someone I personally cant relate to. She has just given away her first surrogate child which she grew very attached too, and is now nursing another child who she knows isn’t hers. She feels she has lost her own daughter and a foreign child is now having her milk. This is an issue I have not read about or from before. It was a very interesting perspective but I would have liked more.

Cadoc, I feel, is the main event here. He is the American with the Welch grandmother, who comes to Cardiff to get research experience after his PhD. He lodges with the sisters and works with El on her night shifts. He struggles in the fog and the events really get to his head as if there is someone else in there with him. He starts speaking in tongues which turns out is actually ancient Welsh.

Major Huw Davis was someone I did not like at all whatsoever. What a prick of a guy! Nationalist to the bone and is completely blinded to logic by his extremism. Nice contrast to the rest of the group though.

The writing is smooth and I had no issues at all whatsoever with the writing. It was a joy to read.

I would read by this author again.

If you are Welsh or have Welsh ancestors, this could be a fun read for you.

One thought on “Review time: The Night Fogs by Frances Hay”