I read book 1 in the trilogy last week and did a full review here. The first book ends with a certain situation which made me want book 2 asap. Lucky me! Book 2 was on NetGalley and I got accepted for the ARC! (i then went on amazon and pre-ordered the ebook to support the author 😊 *well done me*)

I’ve never really reviewed a sequel without reviewing the entire series. I’ve tried to keep the spoilers to a minimum but sorry if I do spoil something for you 🤷‍♀️

This ARC was provided to me by NetGalley on behalf of Bookotoure in return for an honest review. Thank you!

The Girl in the Storm

by Ceri A Lowe 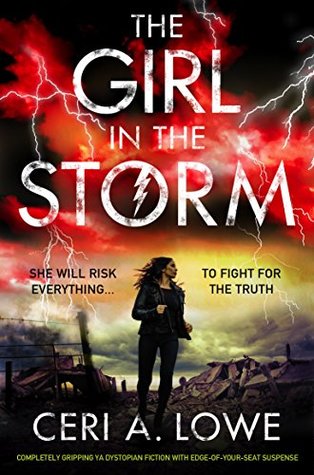 A gripping and heart-pounding story filled with mystery, suspense and danger, about one girl who braves her life to discover the truth. Fans of Bella Forrest, Divergent and The Hunger Games will be enthralled by this explosive and addictive dystopian novel.

As the storms rage around her, 15-year-old Alice Davenport is trained by the rulers of the new world, Paradigm Industries, to reach the highest levels of command. Life within the Community is supposed to be perfect, with the Barricades keeping the population safe from the toxic wasteland and savage people outside.

Rebellious Alice has never felt easy with Paradigm Industries’ plans for the future. Determined to investigate their secrets, she makes a shocking discovery: disturbing experiments on how to create life itself are taking place in underground laboratories, establishing a new order for the society that will impact generations to come…

The First Generation Scouts will rule.

The Second Gen will obey.

And the Lab Made will serve.

Knowing she can’t live in this brutal regime, Alice has nowhere to turn. Until she encounters a boy from beyond the Barricades, who seems to have the answers for a better life. If what he says about the outside world is true, Alice realises it’s up to her to take on the power of Paradigm Industries alone…

In her journey to find freedom, Alice’s courage will be tested to the limit, but she’ll stop at nothing to do what’s right.

the sequel is better than book 1 🤷‍♀️

You are constantly drip-feed information about the characters, the storyline and the world building. This makes you constantly question what is what and who is who, and who is what. It’s great 🙂

The story continues as Carter and Alice deals with their new situations, worlds and watching their worldview crack, but will they break?

Book 2 picks up straight from the ending of book 1 with Carter then Alice’s narrative. However, this sequel quickly takes turns the first book didn’t. There is more twists, more emotions and it’s darker than the first. I didn’t realise how mild book one was before I read book 2 😁 and I do love a dark story.

I secretly hope book 3 is even darker… 😈

There are again two narratives at two different place in time, 90 years apart. The direction of these stories was fairly similar in a way but at the same time quite different. I’m trying not to spoil anything here… it’s not fun

There are quite a lot of surprises along the was but I, unfortunately, anticipated most of them… I did anticipate the ending in chapter 8 🤷‍♀️ but I still enjoyed the trip there.

Again with the slow step by step building of the world. I enjoyed the complicated world of Alice, and the twist and turns it took. Also with Carter’s world, it was nice to have the real world back and see how it actually is after 90 years.

It’s a dual narrative as the first book between Carter and Alice, future and past.

Both Alice and Carter grow as characters and people throughout the story. Carters honest and true personality properly comes through on several occasions while Alice’s intuition and feeling of unease properly shows and leads her right everytime.

Yes, there are some LGBT+ couples in here in both narratives but for none of the main characters.

The writing is great, I have zero issues with it. Obviously, I had an ARC and the writing might differ from the final version.

The pacing was just right, not too fast and not too slow.

There was the occasional event where things just felt too easy for the characters, but these things will always occur even though I’m not a big fan.

I really enjoyed it as I did with the first one, but the second was different than book 1. I felt this sequel was better than book 1 and I have only once read a sequel that was better.

If you have read book 1 The Rising Storm I highly recommend continuing the series. Like ASAP!!! 😁😁

Highly recommended to readers who are fans of YA dystopian novels.

Books for the Beach

Sam's ruminations on books read in the sand.