The goal is to write 50 000 words in 30 days from 1st November to the 30th November. It can be whatever you want to write, but I did the classic and started the 1st chapter of my new novel 🤗

My project is a fantasy novel involving pirates, friendships, love, revenge and some mental health issues. I’m not fully ready to talk about it, but I hope at some point during this month I feel ok with sharing the synopsis with you guys. Even though it’s on my NaNo page, I feel as if it’s more official or super serious once it’s on my blog 😳

So far I’m ahead of my word count. As you can see on the graph below, it shows a straight line which is the progress you would have if you wrote 1667 words a day, and within 30 days you would have 50 010 words. Day 3 (yesterday) I managed to write enough words to be ahead of day 4’s word count, which I was quite pleased with 😁 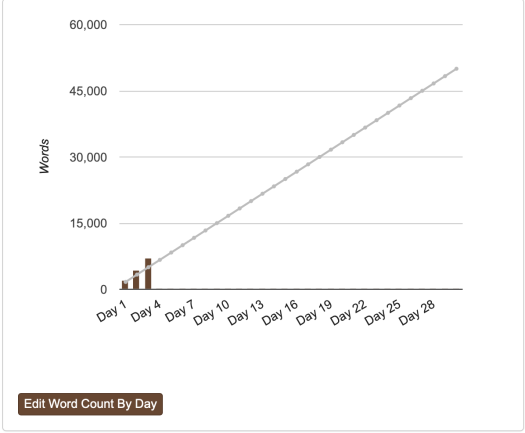 This is how my bullet journal word count tracker is currently looking. I colour in a new box for every 1k I write. There are 49 boxes. When I hit 50k I will ink in and colour the sparkling stars you could barely make out. 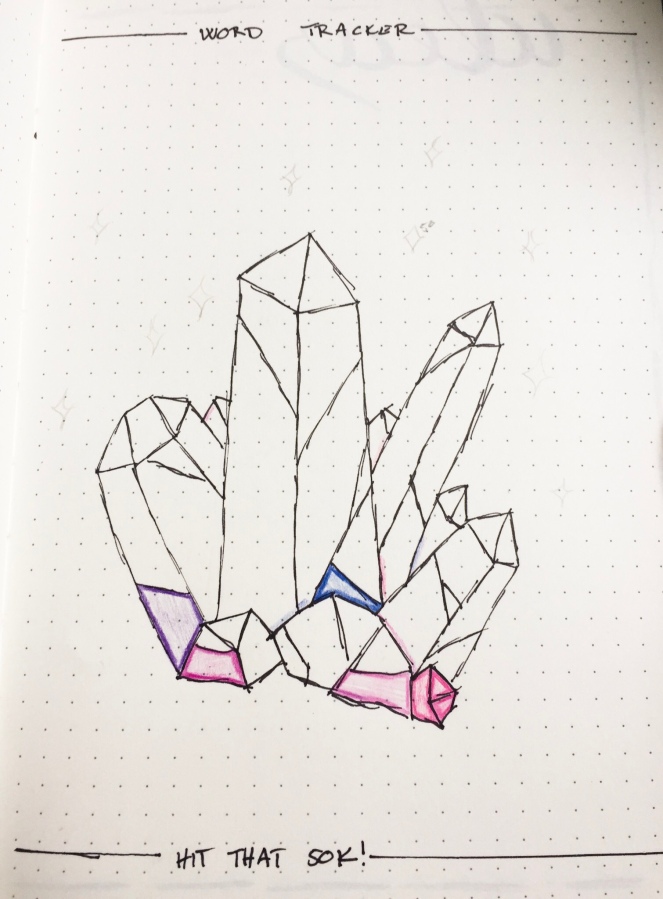 Last year I had a plan, but not an outline. I had the beginning and the end of the story and that was it. This year I outlined everything (almost). I feel much better prepared and I feel that I don’t have to worry about what happens next because its already planned out in my notes. Yes, things don’t always go the way I planned but for the most part, I’m sticking to the outline.

Yesterday there was a character who should have died so the MC could hire a new one who would have more importance in the story later on. However, the story didn’t go like that. the character didn’t die! So when it came to the point where they weres supposed to hire someone new I just let the MC think about how to get rid of the character while going for a walk instead. By the time the MC came back, this character who should have died had decided to retire and already left! I did not see that coming and neither did my MC. but the story sorted itself out and I could hire this new character (or will hire her, its today writing)

For those of you how don’t know, I have RSI (Repetitive Strain Injury) in both hands, fingers and arms – fun times. I got it last year and I’ve slowly recovered since. For the last two months, I have not had any pain/soreness/pins and needles and it’s been great 🤗 (that emoji has never been more on point). However, I have been worried about NaNoWriMo for this specific reason. I don’t want it to come back, I want to keep it down. I told myself that yes NaNoWriMo is the main priority this month but only as long as my hand and fingers are ok with that decision. I’m not going to push it.

The first day went by without much response from my body. So did the second day. The 3rd day, however, I started feeling it in my hands and the occasional finger. I switched keyboards then and crossed my fingers before writing some more. As you know I did really well on day 3!

It’s now day 4. It’s weird how the soreness/pain/ache/numbness moves around from joint to joint, or from finger to finger. I have a different sort of numbness/ache today than yesterday. And I also feel it a bit into my right arm. But it’s not scary-painful and it’s not a sharp pain, it’s more a dull ache, so let’s continue. I will keep writing and doing my physio exercises until it gets too much but not bad.

Word by word people. Not day by day.

For the record I googled “NaNoWriMo gif” and this is my favourite:

Also has anyone made/seen a NaNoWriMo/writing blog tag go around? I really want to do one. Something similar to a book tag but for your own WIP or writing progress. Anyone? Let me know 😊