I’ve had my eyes on this book since April when I came across it during research for my Diverse Own Voices fantasy and sci-fi post. The book didn’t make the post as it wasn’t out yet. But it definitely made it on to my TBR and I got really excited for it to come out.

Imagen my happiness when my request for the arc was approved!! I had to wait for a whole nerve-racking week to get the approval, and I almost died!

This ARC was provided to me by NetGalley and Hodder and Stoughton in return for an honest review. Thank you!

Girls of Paper and Fire 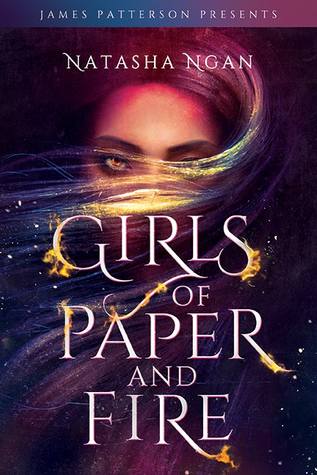 Memoirs of a Geisha meets The Selection in this stunning YA fantasy novel. Perfect for fans of Renée Ahdieh, Laini Taylor and Sabaa Tahir.

Each year, eight beautiful girls are chosen as Paper Girls to serve the king. It’s the highest honour they could hope for…and the most demeaning. This year, there’s a ninth. And instead of paper, she’s made of fire.

Lei is a member of the Paper caste, the lowest and most persecuted class of people in Ikhara. Ten years ago, her mother was snatched by the royal guards, and her fate remains unknown. Now, the guards are back and this time it’s Lei they’re after – the girl with the golden eyes, whose rumoured beauty has piqued the king’s interest.

Over weeks of training in the opulent but oppressive palace, Lei and eight other girls learn the skills and charm that befit a king’s consort. There, Lei does the unthinkable – she falls in love. Her forbidden romance becomes enmeshed with an explosive plot that threatens her world’s entire way of life. Lei, still the wide-eyed country girl at heart, must decide how far she’s willing to go for justice and revenge.

I was really excited for this book, and have been for a while now. I really enjoyed it but it didn’t really quite make it to that 5⭐️ position.

The story follows Lei as she becomes a Paper Girl and is introduced to the Palace and the court, and the King. She moves from a rural village to the hidden palace to become a courtesan of the king, though not by choice. As she finds out how to behave, live and make friends, it becomes clear there is something going on in the country and the King is fighting against it.

I enjoyed the progress of the story. It flowed naturally and the decisions felt reasonably argued.

The world building is steady and you follow Lei as she tries to find her new place at the palace. It’s rich and deep as its portrayed throughout the story.

I loved the world! It’s very obvious from the start that it’s Asian inspired setting but still fantasy with animal type demons. The Asian elements follow throughout the book and I loved it. Its all in the small stuff; the food, how you sit at a table, the bed, the written language, mentions of how her name is pronounced with a “soft rising tone”, and the traditions. There was a part at the beginning where she describes a meal in such detail that I suddenly started to crave Chinese food 😂 I loved every single reference and I’m really glad they continued throughout the book.

There are shamans in this book, but it’s only in the background. It’s not explained how it works, but there is speculation to overuse of magic which is the potential cause of natural disasters. It’s interesting but not the main focus of the book.

The book follows Lei, the ninth Paper Girl. She develops from a naive village girl, into a badass woman. My favourite part was when she learned how to wear shoes. It was a very funny and cute scene that put her upbringing into perspective.

Of the other Paper Girls, I have a few favourites including Aoki, Wren and no matter how bad she was I did feel for Blue.

I liked how unaware the females in this relationship were of the meaning of their feelings until it’s explained by someone else. It was very cute.

The pacing is on point, the wordings a wonderful and descriptions rich. It was amazing! I’m totally going to be reading everything by Natasha Ngan!

Really enjoyed it and highly recommend it to all fantasy lovers, especially dose with a softness for LGBT+ romances.

I not sure if this is a series or not, but the ending might suggest another book to come which I’m totally picking up asap! (when it comes out)