I debated for a long time if I should request this or not. I love fantasy and sci-fi, but speculative fiction to me can be anything. In the end, I was too curious not to. 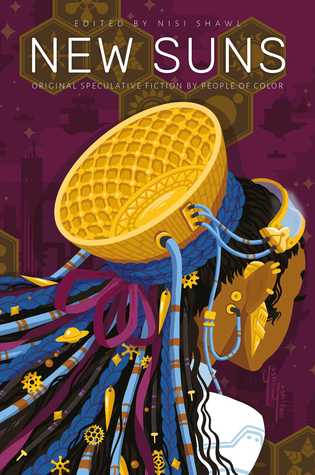 “There’s nothing new under the sun, but there are new suns,” proclaimed Octavia E. Butler.

New Suns: Original Speculative Fiction by People of Colour showcases emerging and seasoned writers of many races telling stories filled with shocking delights, powerful visions of the familiar made strange.

Between this book’s covers burn tales of science fiction, fantasy, horror, and their indefinable overlappings. These are authors aware of our many possible pasts and futures, authors freed of stereotypes and cliche, ready to dazzle you with their daring genius.

Unexpected brilliance shines forth from every page.

Foreword by LeVar Burton and Afterword by Nisi Shawl

Very interesting imagination! I liked the character and the world. It’s clear that danger draws people and aliens in especially if it’s mundane. The was a lot of information packed into this short story which made the world feel more real. Note taken

Again I liked the world and the character and her “magic” but I felt it ended before it began. I’m not sure what the story is. Her finding a future? Wasn’t there a bear coming for them, a talking bear? Yes, she dreamt of being a deer and she felt like one after the dream. So maybe yes the bears would come and take them all and her feeling of a future was her brain in denial? I don’t get it.

The Virtue of Unfaithful Translations by Minsoo Kang

Well, that was something. Its a longer short story based on a fictional reveal of a historical account in a fictional world. But the world was colourful especially in terms of the names for people and things. Then the marginal notes at the end made me think about the entire story in a different way. Very interesting.

The Fine Print by Chinelo Onwualu

I was annoyed at the beginning of this story. Women had no importance and no value in this world. There were hardly any women in this story and the ones who were there to serve and please. Then the djinn spoke the truth in the end and I saw what the author was doing. Well played!

unkind of mercy by Alex Jennings

I’m not sure I got this. Firstly I struggled with the language. English isn’t my first language. I’m fluent but that doesn’t mean I don’t struggle with English that isn’t straight. It was a conversation-type language with some slang.

Burn The Ships by Alberto Yáñez

That almost felt real. It felt like the Aztec’ point of view during the European invasion of central and South America but with magic, voodoo magic and zombies. Loved it. Women again saves the day 😉

The Freedom of the Shifting Sea by Jaymee Goh

Interesting little LGBT+ story with alternative mermaids and feminism. This is one of few that still resides in my mind. It was very memorable.

A cool retelling of the Emperors New Clothes. Very political but I liked them.

Blood and Bells by Karin Lowachee

This felt like an alternate gang story but I love the little details like the chimes in their hairs which made it so very different.

Give Me Your Black Wings Oh Sister by Silvia Moreno-Garcia

I didn’t fully get this one but it involves baby eaters… ?🤔

The Shadow We Cast Through Time by Indrapramit Das

I think this went over my head but I liked the bit where two females have sex and one became pregnant.

The Robots Of Heaven by Anil Menon

This starts off fairly normal but with a feeling that things are a bit off. Then it slowly reviles it’s true nature and it’s weird but wonderful. I loved the style of writing and how the mystery unfolds like a bud in springtime.

I really enjoyed it! The world was interesting and well built up. I liked the characters too; not young, not white, not straight, not your everyday kind of woman.

One Easy Trick by Hiromi Goto

Interesting way to lose your belly fat 😂 very funny. I enjoyed this read.

I love Rebecca Roanhorse’s writing and this story was no exception. It’s thick with native American lore weaves into a modern-day storyline.

Kelsey and The Burdened Breath by Darcie Little Badger

A new twist to “open the window to let the spirit out” and what happens if you don’t. I enjoyed this very much.

I very much enjoyed this anthology of speculative fiction. There were a few that went over my head and that I didn’t understand, but there were a few I really enjoyed. There were funny ones and fantastic ones. I think my favourites were Dumb House, The Robots of Heaven, and The Freedom of Shifting Sands.

The collection felt very subtle but strongly feministic which I enjoyed. Also, I loved that there were so many stories that were LGBT+. it was great 😁

In relation to speculative fiction and my worries about what that mean in the beginning; this was a selection of paranormal, sci-fi (light and heavy), and light fantasy. I very much enjoyed the fantastical element to most of the stories.

I highly recommend this to people who enjoy anthologies, speculative fiction, sci-fi, and fantasy.